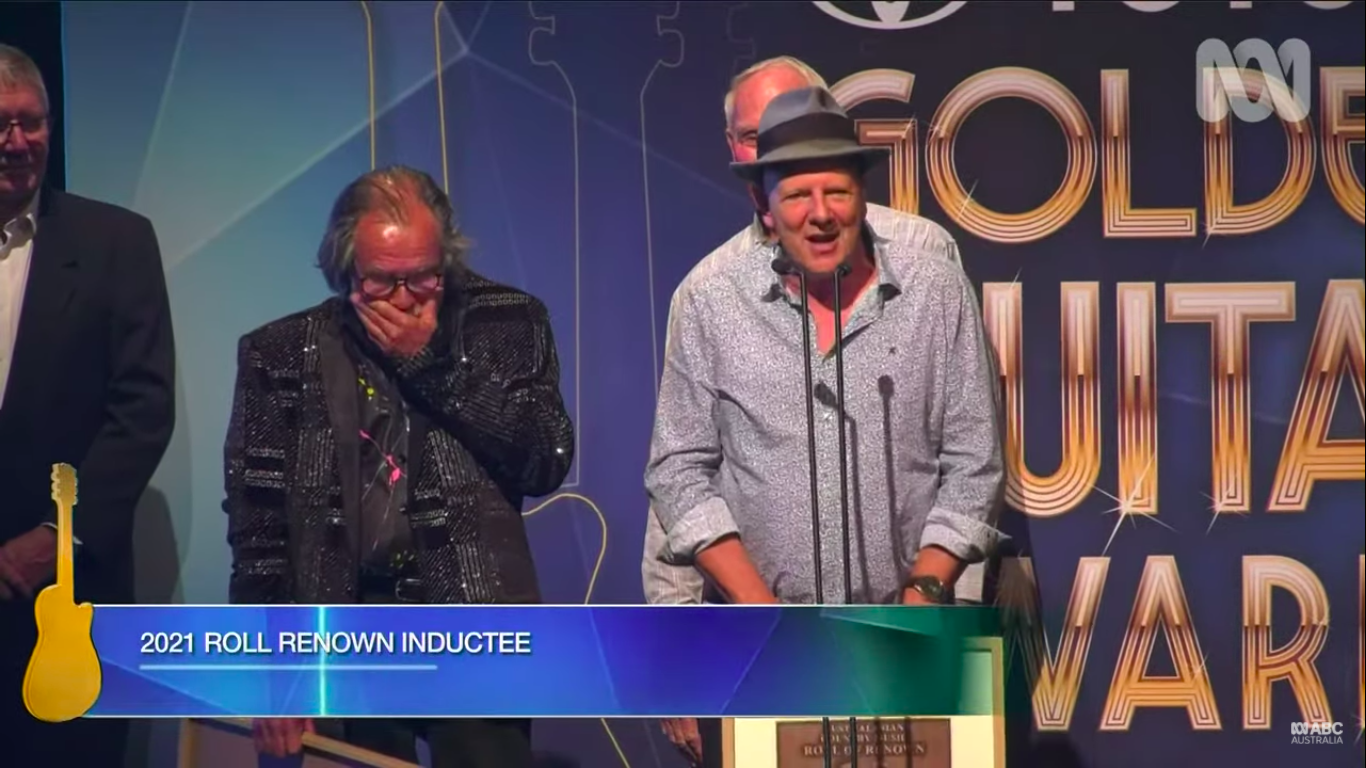 The Bushwackers have plenty to celebrate during their Golden Jubilee year after being inducted into the Australasian Country Music Roll of Renown.

The much-loved lively Australian bush band were recognised for their contribution to Australian country music at the Golden Guitars Awards in Tamworth on Saturday, January 23, with front men Dobe Newton and Roger Corbett overcome with emotion at the announcement.

“This is just incredible” Corbett said.

“It’s been quite a journey. We first came to Tamworth in 1981 and won a Golden Guitar and we fell in love with everybody in country music. We’ve been thrilled to be part of this community, part of Tamworth and part of this wonderful, crazy thing we do every year. Thank you for this incredible honour”.

“I want to pay tribute to this bloke (Dobe) here who never fails to turn up in something crazy to wear and thrash that lagerphone to death and be the front person to all our shows; it’s been quite a journey.”

Newton, who has previously been honoured with an OAM for services to the performing arts as an entertainer and advocate, made a heartfelt speech in front of his industry peers in Tamworth.

“We couldn’t have done it without our amazing family and loves of our lives and all the wonderful musicians who have supported us,” he said.

“Now that this has happened, I can die a happy man.”

Their induction to the Roll of Renown was a highlight of the COVID-adjusted Golden Guitar Awards ceremony.

Both Corbett and Newton are also known for their songwriting skills and Newton co-wrote verses of the popular “We Are Australian” anthem with Bruce Woodley of the Seekers.

The Bushwackers won their first Golden Guitar In Tamworth in 1981 and have been regulars in Country Music Capital and on stages all over Australia ever since.

The Roll of Renown was instigated in 1976 by Radio 2TM with a presentation to pioneer Tex Morton.

Awarded to people who have made a lasting and significant contribution to Australasian Country Music, The Bushwackers bronze plaque was the 52nd to be placed on the commemorative rocks outside the Tamworth Regional Entertainment and Conference Centre.

The plaque includes the words: “A household name, The Bushwackers hold a unique place in the hearts of so many proud Australians.”